On the opposite side of the bottle was the spa or spring stamp; in the instance of the Apollinaris spring this was an impressed stamp consisting of two concentric circles around the figure ‘4’ under which was a curved line with an arrow pointing upwards at each end like an anchor (see fig. 22). One source suggested that this was a form named by one source as the ‘Huguenot cross’.10 Between the two circles were the words: BRUNNEN-M-W o APOLLINARIS and below in three horizontal lines: GEORG KREUZBERG/ AHRWEILER/ RHEINPREUSSEN. 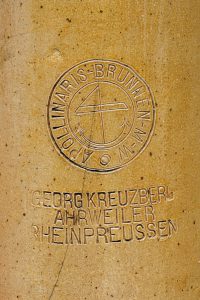 In the Barkham assemblage this stamp was consistent both in design and position on each bottle throughout. There were 12 complete stamps in our assemblage and 86 partial ones. Nienhaus10 wrote, and there were several illustrations in another source19 which demonstrated that this was not always so. Unfortunately in three examples shown on the latter the factory marks were not cited. There were also from time to time variations in what were sometimes described as the ‘cross beam’ part of the Apollinaris spring stamp and occasionally a variety of spelling and font used in the word ‘Apollinaris’ and in its actual position on the bottle. Presumably either the physical stamps were made on site for use in each bottle factory and their creation was not co-ordinated, or it was a deliberate attempt to sell other mineral water as Apollinaris, fraudulently. One fancy version of the cross beam with feathered ends was actually banned after 1889 as it was indeed deemed fraudulent.19