The process of importation of Apollinaris into England was a complicated story which began in 1874 when Eduard Steinkopf, a German living in London and a man named George Smith, approached the Kreuzberg family 22, 23 and after negotiations, set up the import business known as The Apollinaris Company Ltd, London2 from where Apollinaris mineral water was then apparently successfully traded all over the world, although exports from Germany had taken place earlier.11 The trade mark ‘Apollinarisbrunnen’ was used from 1874 and registered in London in 1876.24 The stoneware bottles required very careful packing which was improved following several early disasters. Instructions for the packing in carts from the factories supplying them to the spring were very strict and George Smith took a boat especially up the Rhine to supervise the process of exportation to London and initially, filled orders had to include a percentage of extra bottles as an insurance against breakage. Around 1900 onwards, paper labels were apparently added by importers in the different countries involved.7 Our example bearing the date 1868 seems to challenge the date of 1874 (see fig. 23). 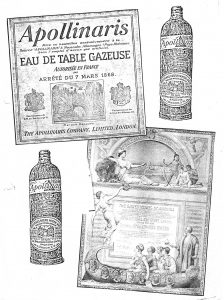 From our evidence it appeared that stoneware bottles continued to be imported into England, at least until 1900 and possibly as late as the start of the First World War in 1914.18 By 1913 the company was producing 40 million bottles, exporting 90% world-wide.20 During the next few years during WWI the trade suffered considerably, although it recovered after 1919.