As a first aim we hoped to be able to determine how many bottles were in our assemblage. The first sherds we found were divided into 100 batches or samples comprising sherds of the apparent same external and internal glaze colour. As described above under ‘8. Observations’ and below under ‘17.3 glaze colour samples’ this ‘matching by eye’ was not always easy. In 2016 the sample was extended to 150 using the same criteria and we found the same difficulty. We hoped to put together matched sherds from one bottle in each bag, but some choices might be erroneous. The final number of 150 glaze colour samples consisted of 282 sherds about a third of the whole. With more time and much more space we might have been able to match more. 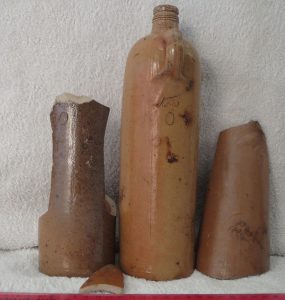 Fig. 24 The range in colour between bottles stamped with 'O'

In 2016 the remaining sherds were divided into 14 groups according to the areas where they had been found, either in the garden, or adjacent. For the areas where most sherds were found, B3, C1, C2, C3 these were sub-divided into 7 colour groups of ‘brownish, ‘reddish,’ ‘yellowish,’’more reddish’ etc according to the external glaze colour, which occurred even between bottles with the same letter stamp (see fig. 24). Sherds were found in most areas but considerably more came from adjacent to the pond in B3 and C3 as shown on fig. 25 and in table 2 as percentages of the whole assemblage. 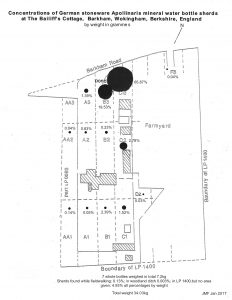 A total of 86 sherds were from no recorded area in the garden and are listed as a separate group (LP 1400 no area). There were three sherds found during fieldwalking; one from land parcel 0063 became a glaze colour sample (number 125) and is listed with LP 2055NE and LP 3130.