Although the accent in this article has been on 19th century German Apollinaris bottle sherds, because of the quantity we found, from the same garden and area we also collected a range of English stoneware from the 19th and 20th century. Some sherds had stamps indicating their place of origin including London, Bristol, Derbyshire and Nottinghamshire. Specifically these were made by: Doulton of Lambeth, Smith of the Old Kent Road (both in London, see fig. 27 for the latter); Price of Bristol, Joseph Bourne of Denby and Lovett and Lovett of Nottinghamshire. Others were made for firms especially for their particular contents and were stamped appropriately, including, Humphries and Holt, St John’s Hill, Reading (see fig. 28) and Batey of London, manufacturers of mineral water until 1910 and 1952 respectively. Although it was not possible to ascertain where the rest of the vessels were made, the sherds indicated the shape of the original vessel, and the tops and necks might show their purpose, including bottles for ink, blacking for boots and shoes, mineral water, preserve jars and so on.

Fig. 27 Mineral water bottle from Humphries and Holt of Reading, dating from before c. 1910 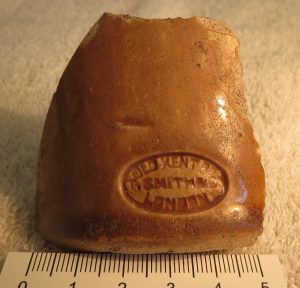