Fig. 1 Janet Firth digging as a gardener in the area SE of the pond (Image: Richard Firth)

It began in 1976 at The Bailiff’s Cottage, Barkham, Berkshire (part of land parcel 1400) when a neighbouring farmer brought his mechanised digger to help us to clear out our silted pond (fig. 1). Along with the mud came all kinds of material, some rubbish including broken glass, rusted iron and other scraps of metal, some domestic, others agricultural. Rather more intriguing we found undateable iron-working debris, and fuel ash some from 19th to early 20th century agricultural steam engines using Welsh coal. Other items were even more interesting and included whole identifiable glass bottles, broken domestic crockery dating from the last 150 years or so, including earthenwares and ironstone, some stamped with the maker’s marks. There also appeared 19th to early 20th century English stonewares, mostly used for storage, leather lawn shoes once worn by ponies when pulling lawn mowers and a sherd from a 15th century German stoneware vessel. But chiefly of interest were those hundreds of sherds of German stoneware bottles which once contained naturally effervescent mineral water. Some of them were marked with numbers and letters and above all the Spring stamp indicating that the origin of the mineral water was the Apollinaris spring in Ahrweiler on the west bank of the River Rhine (see fig. 2). 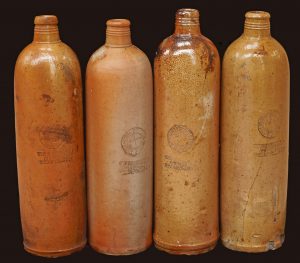 Over many following years more of these particular German stoneware sherds were found across the garden, but in lower numbers. Other odd ones emerged: from molehills in the farmyard next door and one in a woodland ditch. Rarely, members of BARG found a sherd while systematically field-walking archaeologically in the parish when just three sherds were found, out of the 31 fields walked, which together weighed 46gr.

After 40 years we had collected 629 sherds, weighing in total 34.063kg, but only seven whole bottles; the six large ones held one litre, the single smaller ‘baby polly’ bottle 500ml. The sherds consisted of all parts of the bottles: necks, handles, bases and parts of the cylindrical bodies (see fig. 3). We held two major study periods to look at them over the last forty years: 1996-7 and 2016-17 (see fig. 4). 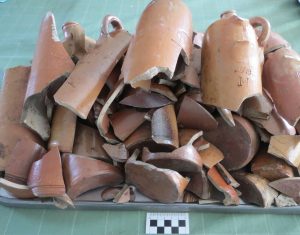 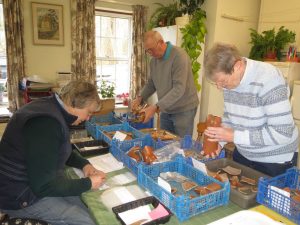 These bottles once held naturally sparkling mineral water from the Apollinaris spring in the Bad Ahrweiler area, west of the River Rhine in Germany. It was bottled from1852 and the mineral water was imported into Britain in great numbers from at least 1874.

Although not as beautiful or well-made as many other German stoneware products (jugs, mugs or tankards designed for the table, for instance) these late arrivals into the world of German seltzer bottles have a certain aesthetic appeal and have matured into becoming antiques which command a not insignificant price.2 One of the main charm of these bottles was the glaze colours which ranged from red tones to orange and dark brown, a light grey-cream through yellow, light gold or fawn to grey sometimes with dark speckles (see fig. 5). Overall the red colours were more numerous. Most finishes were smooth and glossy, a few were matt. The interior glazing mostly resulted in a dull finish but again a few were glossy; generally internally the colours ranged from greyish to fawn to deep orange. 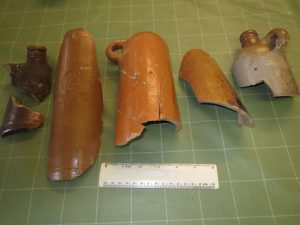 Fig. 5 Colour variations on the exteriors of Apollinaris sherds

But we did not realise at the outset how difficult it would be to answer the questions we posed: how many bottles had we found, how were they made, what did the number and letter marks below the handles refer to and why were the colours of the glaze so variable?