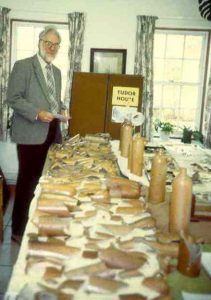 Fig. 8 John Hurst inspects the sherds of Apollinaris bottles found in Barkham in 1996

Our early assemblage of about 550 sherds was seen in 1996 by the late John Hurst,3 formerly of the Royal Commission on the Historical Monuments of England, now Historic England (see fig. 8). He had taken a special interest in cross-channel trade and stonewares in particular and and suggested to our surprise that at Barkham we might have the largest known assemblage of stoneware Apollinaris bottles in Britain, if it was greater than the collection in the Castle Museum, Norwich. Two of our 1996 Barkham Survey team members, the late Barry Parker and his wife Gwen (see fig. 9) went to look, courtesy of Bill Milligan, Assistant Keeper of Archaeology. They recorded every stoneware bottle and sherd in the Museum’s collection and found that John was correct. We had more. 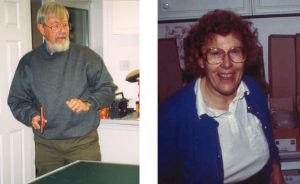 When eventually in 2014 the Museum of Reading heard about this important Apollinaris assemblage here, the accession committee was keen to acquire it for the Museum collections, which was an added encouragement to finish the project.