5. Why were so many stoneware Apollinaris bottles found here?

Why then were bottles and sherds for Apollinaris mineral water found in such large quantities in the pond and around The Bailiff’s Cottage? Who had purchased these bottles in the first place?

From at least 18254 The Bailiff’s Cottage was, until the late 1960s, owned by the present Barkham Manor, formerly Barkham House, across the road (see fig. 10). It had been called by a variety of names such as the ‘Steward’s House (1829),5 the ‘Farmhouse’ and ‘Manor Farm’ at least until 1955. Some of the nineteenth century censuses show6 that the farm bailiff or steward (farm manager) lived here or an employee of the family at the Manor House. It seems likely that some of them at least from the late 19th and early 20th century were given household rubbish from the Manor House to dispose of and usually threw it into the pond. If he did not, someone did! A formal collection of domestic rubbish by Wokingham Rural District Council was not introduced until after the First World War. 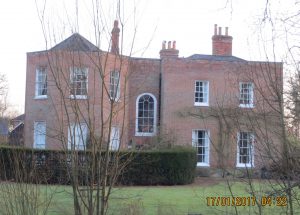 Who then was the consumer of Apollinaris mineral water imported in stoneware bottles locally? The strongest likelihood was the occupant of Barkham Manor. The property was bought in 1878 by John Walter III (proprietor of The Times of London newspaper), who lived on the adjacent estate at Bear Wood just to the north in the parish of Sindlesham. He acquired the property in Barkham from the Trustees of the Clive estate after the death in 1874 of Mrs Charlotte Clive, widow of Mr Henry Clive,7 but he always let it.

Unfortunately we do not know who, if anyone, was living in the Manor House immediately after 1874, until it was rented by Lieutenant-General William Rickman JP who moved in with his wife, seven children and servants from 1881 until his death in 1900, although his widow continued to live there for a while longer. The censuses of 1881 and 1891 indicate there were relations and visitors in the house as well.6 We may perhaps presume that William Rickman had a penchant for drinking Apollinaris mineral water. The farmer llving at The Bailiff’s Cottage in 1891 was John Alright.6 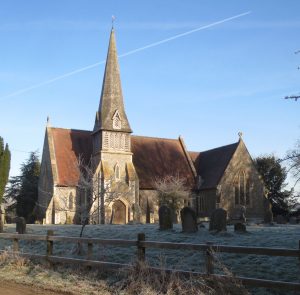 There was one recorded notable occasion in Barkham when Apollinaris could also have been offered: this was the day William Rickman’s eldest daughter Ethel Mary married Charles Bunce Greenfield who rented the second largest house in the parish, Barkham Square. The wedding took place in the small parish church of St James’ Barkham (see fig. 11) on 25th June 1885,8 but no doubt the wedding breakfast may have been held afterwards at the Manor House.