After the body had been created we supposed that the circular bases were cut and added later (see fig. 14). These were usually flat but out of 37 we found two which were slightly concave. All the bases were glazed but the finish was not uniform: 17 had smooth bases, 14 rough bases and 4 were combed. When we found them two had a hole made though the centre post-firing; if this was intentional it was presumably for some sort of secondary use. What exactly is uncertain. The handles were sometimes clumsily finished, but the necks and tops were of better craftmanship (see fig. 15). 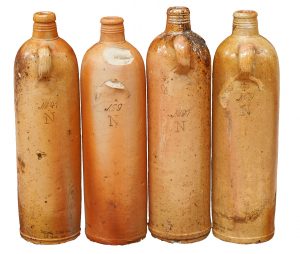 Both the exterior and interior of the bottles were salt-glazed, including the neck and base. The lack of uniformity of the glaze on the indivdual bottles might possibly be due both to the mixing of the clay and uneven firing depending where the bottle was placed in the kiln. The different bands of colour, sometimes vertical but also horizontal, were explained in part by Brinkmann15 who said that in certain areas of the kiln there was a lack of oxygen due to the tight loading, which resulted in light brown or grey stripes. Nienhaus10 suggested they were fired together in kilns capable of taking 10 – 12,000 bottles at one time; overcrowding does sound distinctly possible (see fig. 16). 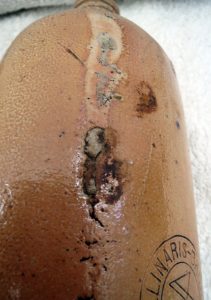 Fig. 16 Evidence of Apollinaris bottles touching in the kiln

Apart from colour the most obvious difference between the bottles was the style of neck (see fig. 17). All the Apollinaris bottles had a circular projecting rim at the top of the neck, some of which were deeper, others more rounded in profile. The aim of course was to retain the effervescence of the mineral water, using some sort of cap. Below the rim a few bottle necks were either completely smooth down to the join with the body, or had two or three parallel horizontal rings, no doubt designed later to be more effective in keeping on a cap. Unsurprisingly it was suggested that the plain neck with no rings might be earlier than the others15 and were created on a wheel.10 Sources of information provide contrasting observations about how the necks were made and attached to the bottles. One was that, following the making of the body of the bottle in the pressing machine, the potter tapered it and added the neck which had been turned on the wheel.11 However it is likely that the necks with rings might have been created in a bottle press from 1879. 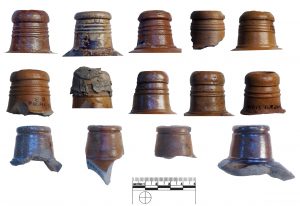 Fig. 17 A selection of neck styles on the Apollibaris bottles (Image: Richard Miller)

Brinkmann suggested that the necks of earlier mineral water bottles were dipped in pitch and sealed with wax and vellum, but that they were not then air-tight.15 However we had three samples of three-ringed bottle necks containing remnants of a cork’. These were clearly superior than wax in sealing them. In one instance this was covered with the remains of a light metal cap probably of tin,15 (but not pewter or lead), clamped over the horizontal rings. Another cork had a hole bored through its middle, probably again for an unknown secondary use. The literature suggested that corks were also wired down to prevent the escape of gas.14 , 11 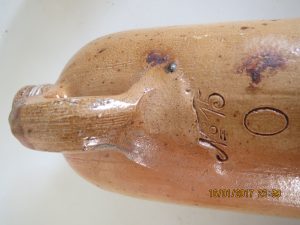 Fig. 18 The handle of an Apollinaris bottle finished with thumb strokes

After the addition of the neck the handles were then attached to the body below the neck, although their position up the side of the bottle varied. They were made of a sausage-shaped length of clay about 19mm wide, flat on the inner side but rounded and sometimes scored on the outer and fixed to the bottle at the top with a ring of clay, but roughly finished at the bottom with one or two thumb strokes (see fig. 18). The handles were curved just sufficiently to allow an adult thumb to be inserted between the handle and the body of the bottle (see fig. 19). The adding of handles and later stamping was apparently work undertaken by women and children after the bottles had dried in drying sheds for 5 to 24 hours and had become leather hard.10, 2 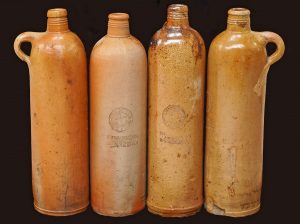 There were several other signs that this was a product created rapidly and en masse. One of the complete bottles was slightly lopsided; several had flat areas on the body exterior where they had touched one another in the kiln. Abrasions, thick streaks of glaze, small pits and irregularities, horizontal cracks, thumb marks, localised bulges, air bubbles and little pieces of lead were all visible on many bottles (see fig. 20). Very few bottles, if any, were exactly the same size in every detail and measurements of different aspects of several bottles demonstrated this fact. All contributed to the impression that the bottles were probably created in a number of different factories in large quantities and rapidly finished by hand; they were presumably cheap to make.