All but one of our complete Apollinaris bottles had four ‘marks’ stamped on the cylindrical body; extant tools for stamping which have been collected in Germany were made of boxwood16 which, being very hard, was apparently the best wood for the purpose, especially if carved along the grain. 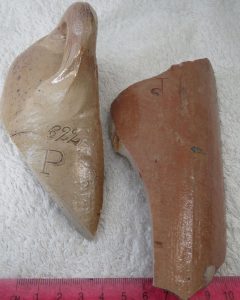 Below the handle was a number, usually (when found in Barkham) between 1 and 99, with one exception, a no. 136 found in July 2017. Below the number was a letter known as the ‘factory mark’ by one source.2 The number was described by another source as likely to do with spa accounts.14 Only one complete bottle carried a letter but no number. Initially, at The Bailiff’s Cottage we found ‘M’ and ‘N’; but eventually others marked with ‘J’, ‘O’ and ‘P’ but only those and no other (See fig. 21). I have heard of other letters found elsewhere in Britain, such as ‘B’, ‘H’, 'K', 'L' and ‘R’ and we look forward to hearing about any additional letter marks which might have been recorded. More detail of the number and letter combinations found in Barkham are recorded below in table 1.

We understood initially, from several sources, that each letter might refer to the factory or the village where the bottle was made, but no-one agreed completely about which places these were. If the letter marks did relate to place names as a single location It was suggested that M might have stood for Mögendorf, (Hurst, pers. com) 3 ‘N’ for Nauort and ‘O’ for Oetzingen (the potter Peter Letschert, pers. com.).17 All three are indeed in the Westerwald. The meaning of the rest, ‘J’, and ‘P’ were not explained. One source thought that the lack of information was because the records had been destroyed during WWII. 10 The next question was how many centres or factories were making these bottles? Reading the German texts one gets the impression that there might have been scores or even hundreds. One glimpse at a known fact, however: in 1880 the manufacturer of stoneware bottles in Mögendorf was Carl Wilhelm Strodent.10

However, the consistent grouping of the letters in the middle of the alphabet marked on the bottles found in Barkham, led us to to think they could refer to batches rather than places, an idea which was also suggested by Lorraine Mepham (pers. com.).18 This might indicate that the order for delivery to Barkham (from the London-based importation company) took place within only a short period of time. The subject needs further investigation; future excavations at stoneware bottle factory sites in Germany might help to clarify the issue.